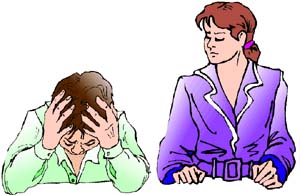 When you start seeking the Kingdom first, be prepared for all hell to be unleashed. What's more, our enemies become those of our own household.

Harold Hill faced a dilemma with his wife and she was won over after he decided to stand on God's chain of command. Here is his story:

A long time ago, I had a religious wife. She went to her temple religiously every Sunday morning, doing the religious things that they did. She even wore a hat, or a little doily thing on her head that pretended to be a hat.

Slue Foot began to work on my wife after I had met Jesus for real, because he knows that family unity is vital to Christian growth. The home is the final testing ground for this whole spiritual dimension, and one night the battle was engaged. My wife came out with it:

Look, you Jesus fanatic. I've had it right up to the eyeballs with this fanatical bit of yours. If you don't quit, I'm getting out of here! I'm fed up with all this ridiculous 'Praise the Lord,' and 'Thank you, Jesus' business."

Now, she had kind of hinted at these things before, but I hadn't taken her seriously. With a little practice, a husband can tell when a wife is just threatening and when she is in earnest about something. This time she meant it, and I knew it. We'd been sitting across the grocery table from each other for about twenty-five years at that point, and she came through loud and clear.

I almost panicked. I didn't want to lose my wife. Jesus was going to have to come to my rescue on this one, or I was a goner. "Lord, what do I tell her?" I wailed. The answer I got came in the form of an understanding: "State your position to her as head of the house."

He directed my attention to the Scriptures describing the chain of command He has established for best results in Kingdom living, earthside:

Until that night, I had never realized this chain of command and the reasons for it were laid out so plainly in the Scriptures. And here I was being told to explain these things to my wife. It made me more than a little uneasy, because we had never talked about these things before, and I didn't know how she would take it. We had a good working relationship, I thought. I paid the bills and mama did the cooking. I didn't interfere with her department; she let me run mine. She couldn't add two and two together, and I couldn't manage to make instant oatmeal, so it worked out fine. She'd never paid a bill; I'd never baked a pie. Without each other, we'd be lost. I'd starve to death, and she'd go to debtor's prison.

Slue Foot was trying to split us asunder. And it seemed that the advice I was getting from Heavenly headquarters wasn't going to help matters all that much. For a while, I wasn't sure I understood whose side God was on and what exactly He wanted me to do. That called for another question: "Lord, what do you mean, that I'm to state my position? What is my position?" I had never thought it through. "Who comes first in your life?" was how He put it to me. And then I understood what He was getting at.

Lord, give me the words to tell her," I prayed, and this is what He had me tell my wife: "Look. I hope you don't go. I hope you don't feel that you have to leave." I was getting it straight in my own mind as I was telling it to her. "But let's get this one thing settled right now, once and for all: Jesus Christ is number one in my life, and you are number two."

Zonk! She looked as if I had hit her on the head with a chair. After all these years of thinking she was something really special in our household, she was confronted with the fact that she had to take second place. It was kind of rough, and I admit I felt sorry for what she was going through.

It was a tense moment. I was learning that you don't make apologies for God's Word. When you stand on it and tie your statements into eternal truth, God won't let you down. He'll back you up.

Immediately Slue Foot got on the defensive. The power of Satan began to leak out because the truth had been spoken, loud and clear.

"But where will I go?" mama asked, her voice trembling.

"I have no idea," I told her. "As far as I'm concerned, you're welcome to stay, but no more quibbling or argument about one thing: Jesus is first; you are second. If you have to go, you'll have to figure out the where for yourself. And if you go, don't slam the door when you go out. You just might want to come back sometime."

She just stood there, thinking about it.

In the midst of the impossible situation, God gave me a gift of faith that beat anything my intellect could have cranked up. I stopped holding my breath, because I felt the faith rise up in me that God would deliver us out of the sticky situation. He let me know that if our marriage came unglued, it wouldn't stay unglued forever. I understood by faith that my wife might go, but that if she did, she'd be back. As it happened, I got a brand-new wife without having to bother about divorce or alimony-but not without many trials and tribulations. It turned out that mama didn't leave. She hung around and got saved. She became a new creature in Christ Jesus.

Two friends of mine were talking one night, and I learned that between them they had seven wives, and not a good one in the lot. King Solomon did worse than that. He had a thousand wives, all of them pagans. But the Lord gave me one wife, and made her perfect.

From the book, HOW TO LIVE IN HIGH VICTORY by Harold Hill, Logos International, 1977